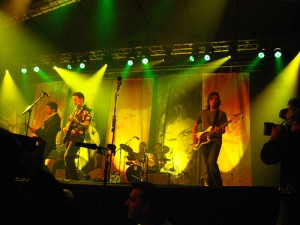 Belle and Sebastian will be seen this July in Boston as the band is all set to entertain their fans gathered in the concert venue in the state. The band was formed in Glasgow and has Stuart Mourdoch as the lead vocalist and guitarist and the band is known for the majestic sound that is reminiscent of the folk-rock era of the 60’s. The band will be performing at the Bank Of America Pavilion located in Boston on the 9th of July 2013.