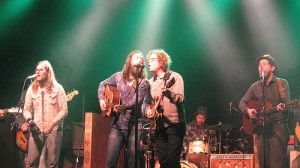 The Black Crowes  and Tedeschi Trucks Band will be taking the Boston music scene by complete storm this season. The two super bands will be seen performing live at the Bank of America Pavilion. The rock bands known for their hearth-thumping music will be holding the concert on the 6th of August 2013. Fans can witness some live fun as the the bands perform to come of their most loved and popular songs. Formed in the late 80’s The Black Crowes have decades of music to present to the fans.