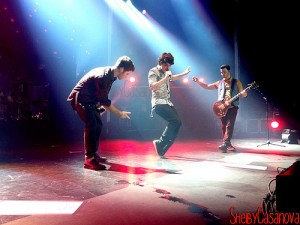 Jonas Brothers will be seen this season in Boston, Massachusetts. The band known for their exceptional style of music and unique live concerts will be performing live in Boston. The event will be held at the Bank of America Pavilion and is anticipated to be witnessed by a large number of fans the event will be held on the 22nd of July 2013 and is surely going to be a memorable one. The band originally hails from New Jersey and has attained fame due to its pop music.