In 2017, Third Eye Blind toured with Silversun Pickups for another Summer Gods Tour which was described as the most scintillating, inspiring collective moments of their life, exploding with music and 2019 is set to be even bigger!

Third Eye Blind takes a lot of time in picking out the bands they play with. Their most recent project was last year’s Thanks For Everything EP, which comprised seven covers of artists from Queens of the Stone Age to Santigold.

With Third Eye Blind and Jimmy Eat World both selling out shows individually last year, 2019 is going to be even bigger with more sold out venues! If you want to see Third Eye Blind and Jimmy Eat World at the Rockland Trust Bank Pavilion (formerly the Blue Hills Bank Pavilion), Boston, for their Summer Gods Tour 2019 buy your tickets today before they sell out. 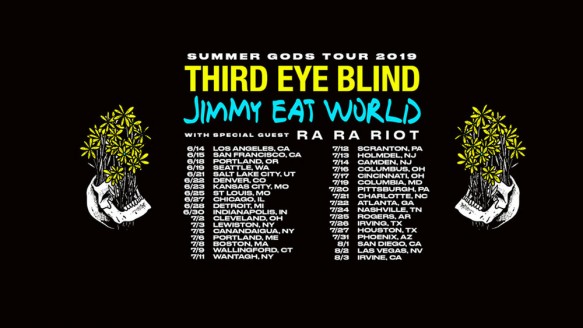