Yes, they’re coming to Boston for a one night only show at the Bank Of America Pavilion, on the 21st of July 2012.  Mark this date and don’t miss it! 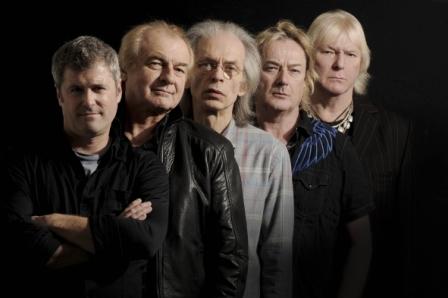 Who can say no to this progressive rock band that produced one of the catchiest guitar hooks and adlibs ever recorded?!  One of the forerunners of progressive rock music, Yes banded together in London in 1968.  Their everlasting #1 smash hit of 1983, “Owner of A Lonely Heart” is considered one of the most recognizable and enduring pop-rock anthems to this day.  They are also known for their 1970’s hit “I’ve Seen All Good People”, and the 1972 9-minute US Top 20 smash “Roundabout”.  During their 40 years of  existence, there had been several lineup changes, yet their worldwide fan-dom remain unshaken.  Some attribute it to their hook-laden ditties, yet more importantly, they helped shape a genre of ‘digital music’.  Yes are one of the pioneers of synthesizers music.  Their music is marked by a marriage of symphony and rock, garnished with lush harmonies, electronica, poured on heavy spoonfuls of grand and mystical sound effects.  Many have wondered — ‘where is Yes now?’  Yes, they’re touring band, bringing and ushering the modern sound they pioneered years back, into a new generation of music innovators.